Július Koller: Plus Minus U.F.O.

Július Koller: Plus Minus U.F.O.

Exhibition is organized in collaboration with The Július Koller Society

The plus and minus are signs essential to mathematics but also to other fields, just think of the Rh blood group system or the electromagnetic poles. They may also indicate the relativity of economic growth or the rise and fall of the politicians’ approval ratings. In the media, they are often visualised using curves with ascending or descending slopes, thereby confirming the quantitative character of how we think about the world. The exhibition makes use of the binary substance of these symbols. Enclosed in cartoon speech bubbles, the plus and minus already appear in Július Koller’s early paintings from the 1960s. Later in the 1970s, they show up again on his text cards. Finally, the artist places them on a Möbius strip to express the relative simplicity of distortion and the pole reversal of political views or ideals. Throughout his oeuvre, the works presented in this exhibition included, he expands the effect of the plus and minus as communication signs on the sphere of the everyday life. In his Cultural Situations, they function as universal cultural encoding systems. They point out to mundane environments where the borderline between inside and outside, truth and lie, art and non-art becomes increasingly blurry. However, he is also showing a method for grasping this ambiguity and thinking it through

The exhibition is divided into four differently structured parts. The first section consists of ready-made (household) objects, which are transformed by being labelled with the codes J.K. and U.F.O. One of these is DEZART (1973). This empty paper box represents a fictional product, a sanitary cultural implement for getting rid of bad social smells. At that time, the artist was commenting on the country’s political atmosphere. The work still addresses current questions, especially in the light of the ongoing pandemic.

The second section consists of the 1974 Projekt realistického UFO (U.F.O.), with a series of nine collages made from the packaging of consumer products. The title of these works alludes to the doctrine of the Socialist realism, which required every academic artist to incorporate the theme of the struggle for a classless society in their works. Koller situates this struggle in the context of consumerism, mass production, and technical reproducibility. By isolating various types of product packaging on a blank paper, he creates new consumerist icons.

The third section of the show presents ink on paper paintings alongside photographic documentation of the painting process. The 1982 photographs by Kvetoslava Fulierová entitled Štetcovanie (U.F.O.) / Paintbrushing (U.F.O.) capture the artist working in his apartment, which he used as his studio and his exhibition space. Július Koller demonstrates his return to painting by vigorously working with paintbrush and Indian ink as his private variation of Neo-Expressionism and Bad Painting.

The fourth and central part of the exhibition focuses on Koller’s preoccupation with the magical wave and the Celtic signs. The exhibition presents two critical works from the early 1990s: the installation Nová Vážnosť(U.F.O) / New Seriousness (U.F.O) from 1990 and the 1995 painting installation Veľké U.F.O. / Big U.F.O. The web and wave signs date back to the artist’s early period. Nevertheless, Július first started exploring them as magical symbols in 1974, in relation to the conceptual idea of an underground civilization and a culture related to the fabled lost Atlantis.

Big U.F.O. (1995) was initially exhibited alongside Malé U.F.O. / Small U.F.O. as part of the Dream of a Museum (Sen o múzeu) exhibition in Bratislava’s House of Art. In contrast to conventional painting, the work is suspended in a net and levitates horizontally above the ground. The big sheet of hardboard is painted with the motif of a net by using the zig-zag sign, the broken version of the wave sign. This refers to the Slovakian national symbol of the three hills and, at the same time, to the swastika motif. These mutations of magical signs were predominant in Koller’s oeuvre throughout the rise of nationalistic tendencies related to the disillusionment and uncertainty concerning the nascent democracy in his home country.

In the so-called transitory period, shortly after the fall of the Communist regime and twenty years after the artist had started using the question mark in his works, this personal symbol of uncertainty was transformed into the symbol of the communication wave. The wave sign in the New Seriousness was presented as part of Koller´s and Peter Rónai’s joint exhibition at the Gallery of the Slovak Visual Artist Foundation in Bratislava in 1990. Five rows of drinking glasses twisted into two opposing arches suggest the picture of a mob. The installation is dated to less than a year after the protest gatherings had taken place in the squares, expressing the will to topple the Communist government. The fragile mass of empty glasses takes the shape of a wave which is exposed to forces that interfere with its stability. In some photographs, Július Koller intentionally captured the continuity as broken by the toppling and breaking of the glasses in various places, where random collisions affect the unit. Július Koller’s wave is a work that today, like back in the 1990s, when the borders between Slovakia and Austria opened, questions the limits of the openness of European democracies. 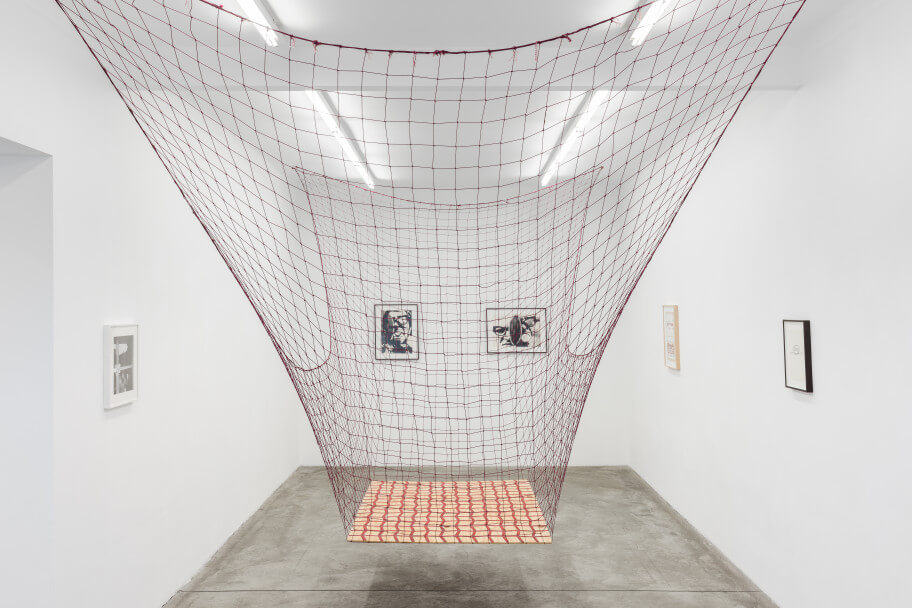 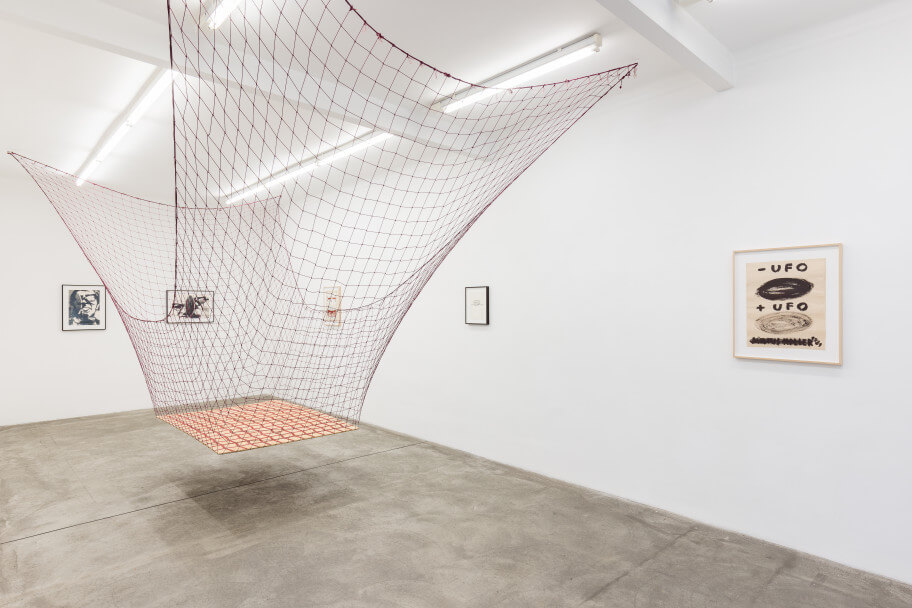 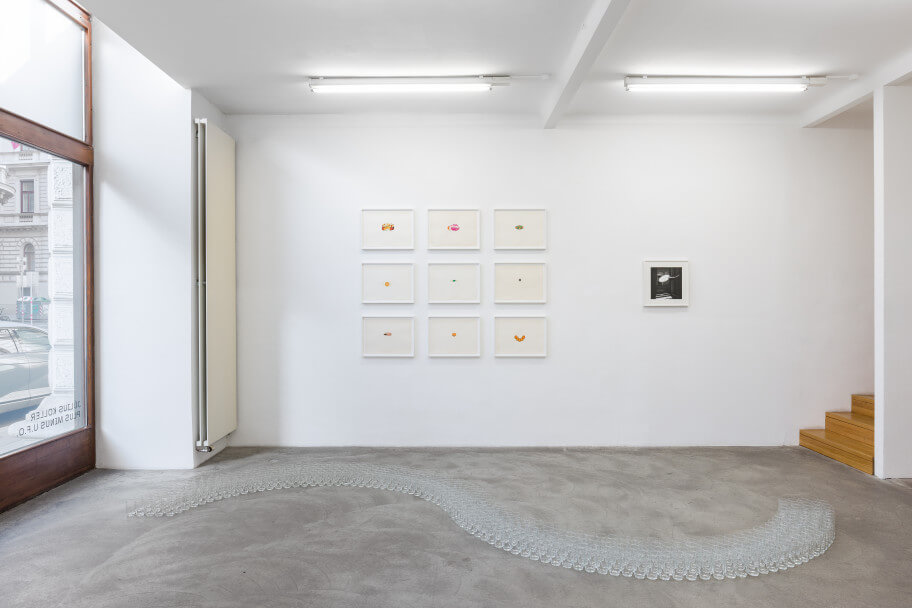 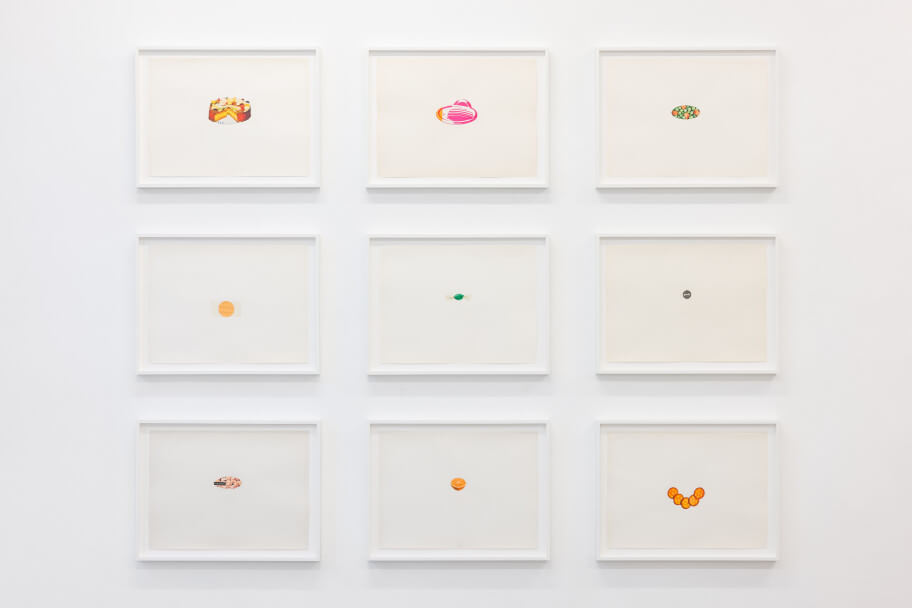 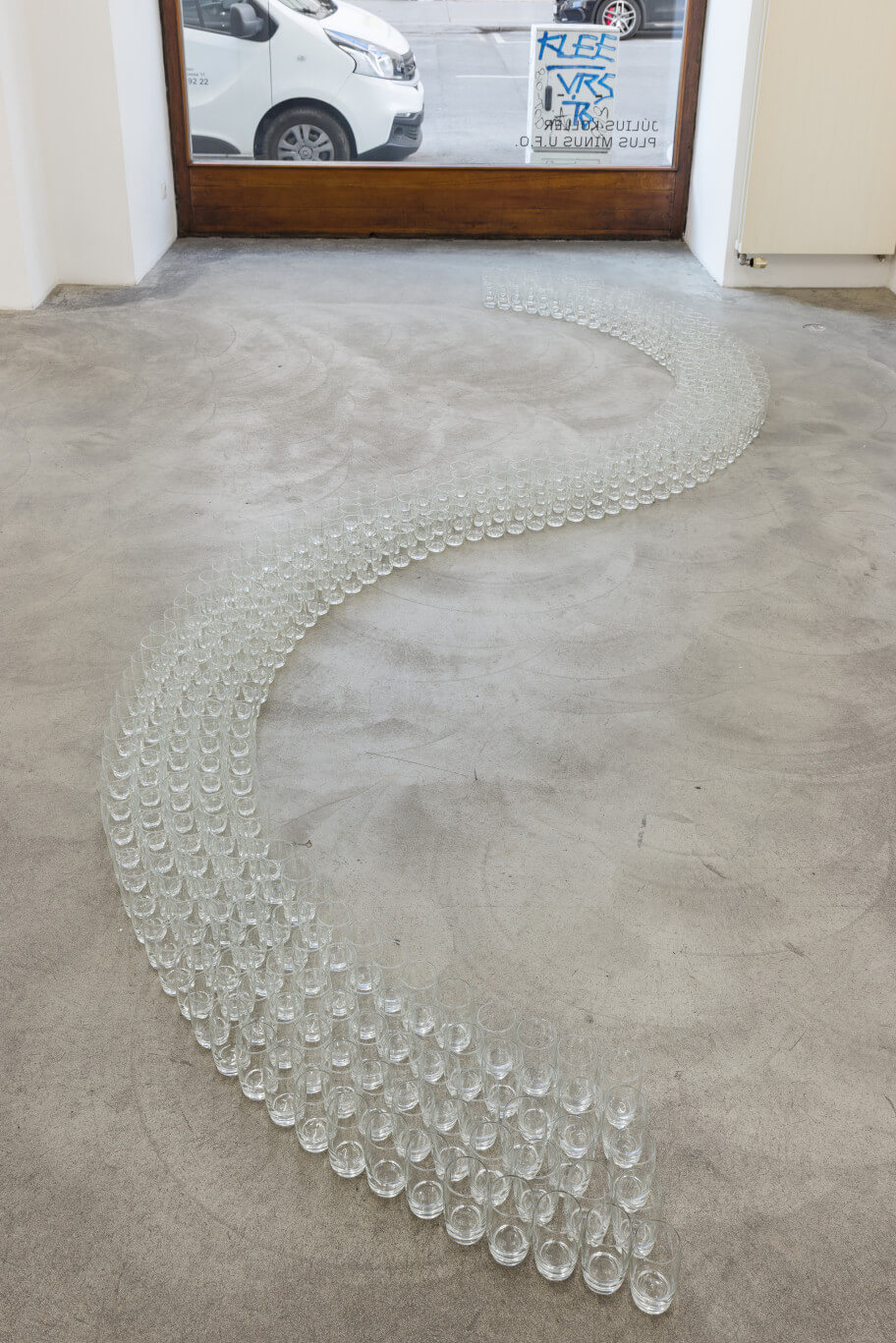 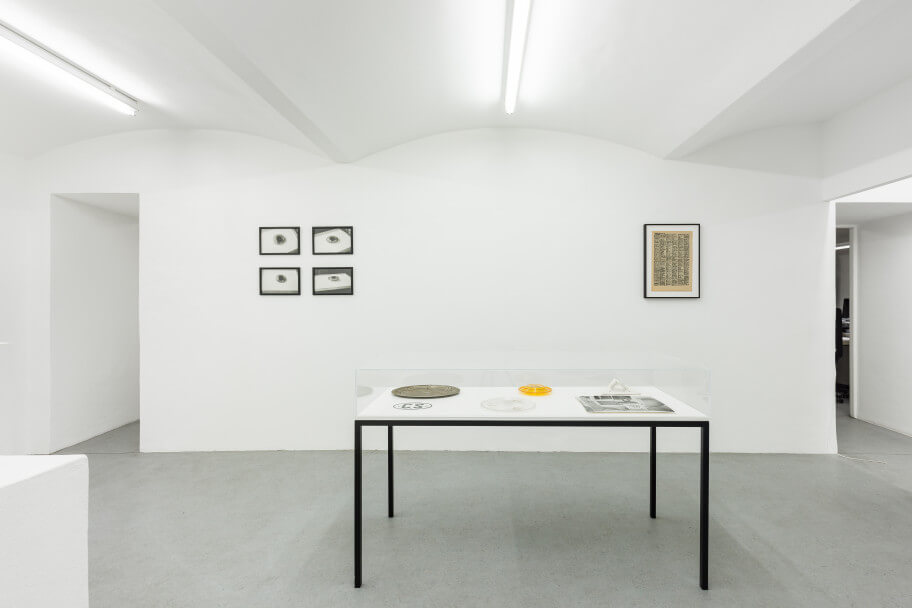 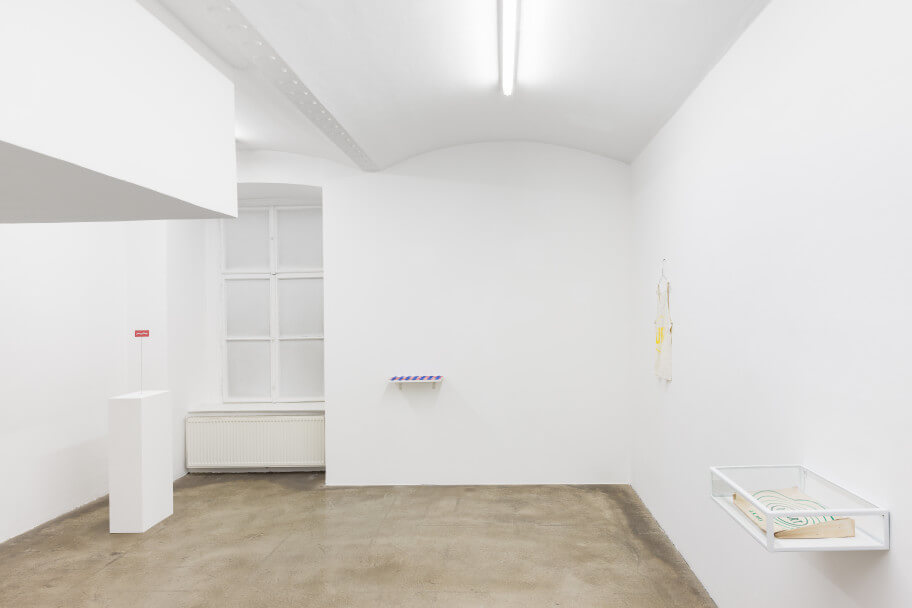 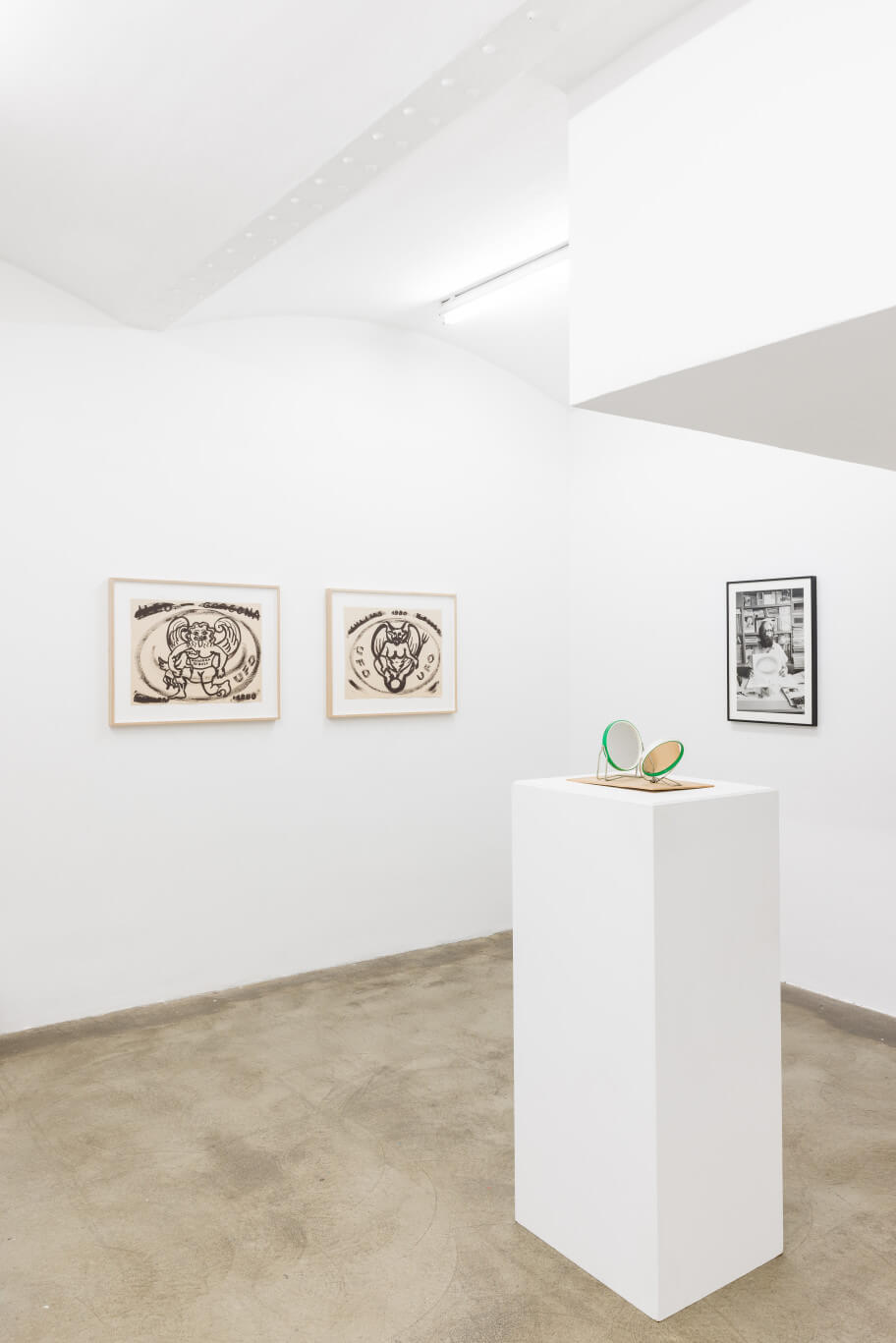